This innovative project was a fun way to bring together a bunch of like-minded people to celebrate all things “DANCE” and what better way than to create a bit of mystery, add a touch of movement mix it up with a bit of Jazz music and stir it all together to create some fun!

The Wangaratta Performing Arts Centre, Cultural Development, and Community Engagement and Planning teams worked collaboratively on a TOP SECRET DANCE PROJECT that culminated in a public dance performance a “FLASH MOB” on Saturday 2 November 2013 at the Reid Street Community Stage at the Wangaratta Festival of Jazz and Blues.

The participants were trained by Andy Howitt from Ausdance Victoria and Tim Podesta from the Regional Academy of Performing Arts. Participants were invited to attend one or all three training sessions (in August, September and October) in five locations (Moyhu, Milawa, and three CBD locations). The focus of the project was to deliver a community dance experience involving a broad range of people and locations, it also aimed to engage people in an innovative way, particularly those who are least likely to engage via traditional methods. This project enabled the community to become engaged and actively participate in the arts and provided an opportunity for people of all ages & abilities to dance!

The interest in this FREE activity was phenomenal, with 176 people registering to participate with ages ranging from 6 months old to 72 years young! 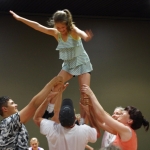 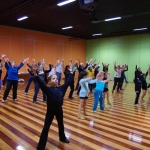 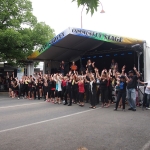 Click below to watch the Jazz Attack short film by Killer Pig productions & see how it was done!

Click below to watch the Jazz Attack Flash Mob!